For those of you who know me, Halloween is one of my favorite times of year. I love the decorations, carving pumpkins, dressing up, the fall colors, roasting pumpkin seeds, hot apple cidar - the works! We had a great Halloween this year. Thomas was really excited to be able to dress up like a pirate.

We went to the Pumpkin Patch Carnival Festival in downtown Prescott, AZ. The kids got a back pack to fill with treats they won for playing games. Here is Thomas in his adorable costume. 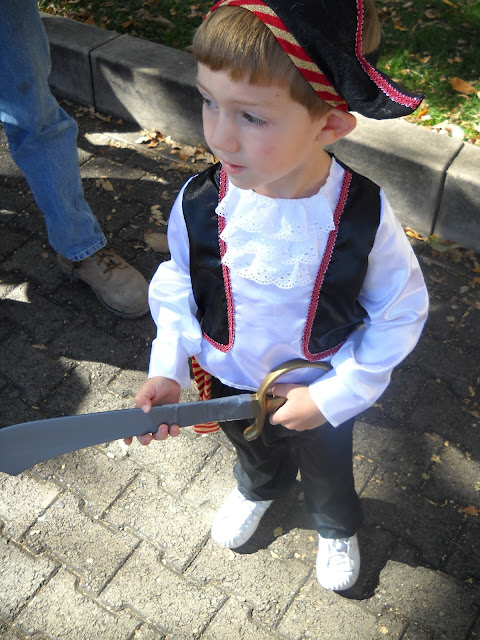 Not surprisingly, Thomas' favorite part was riding on the little train. It actually made me a little nervous because the driver was driving these kids really fast. But I am sure that just added to the excitement. 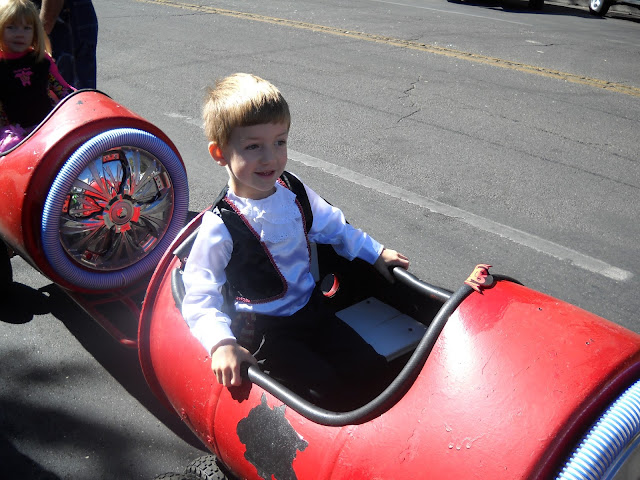 Every year for as long as I have been out on my own I have carved pumpkins. I recruited Aaron into my pumpkin carving madness even when we were first dating and it has been a tradition ever since. I think his favorite part is the roasted pumpkin seeds, but he humors me, nonetheless. 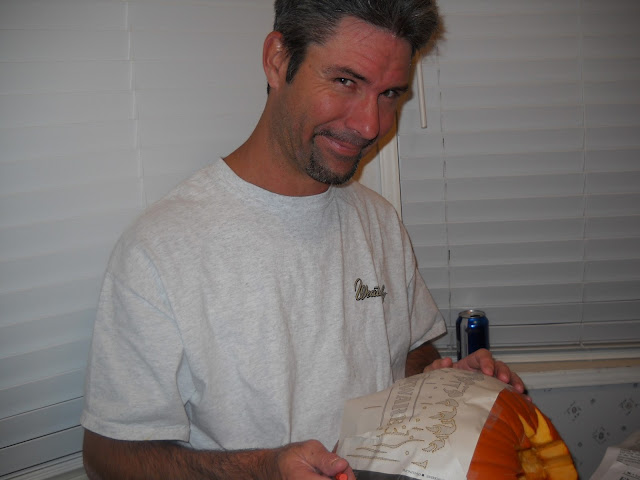 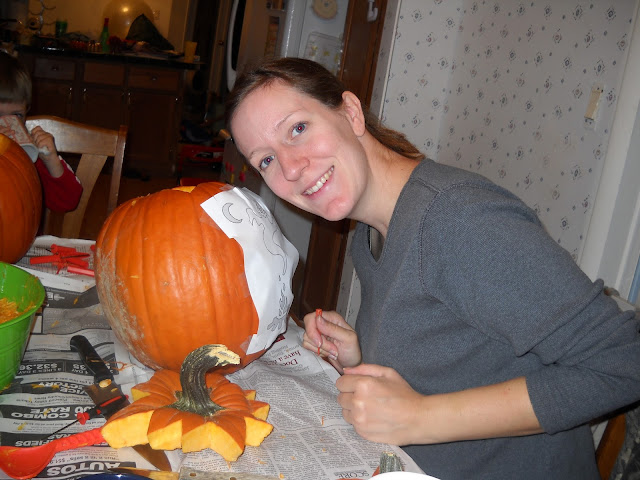 Thomas got to scoop out his own pumpkin again this year. He thought it was a little too gooey, but he did a great job. We even let him "carve" his own pumpkin. This resulted in this poor pumpkin having multiple stab wounds from the pumpkin carving knives and pokers. 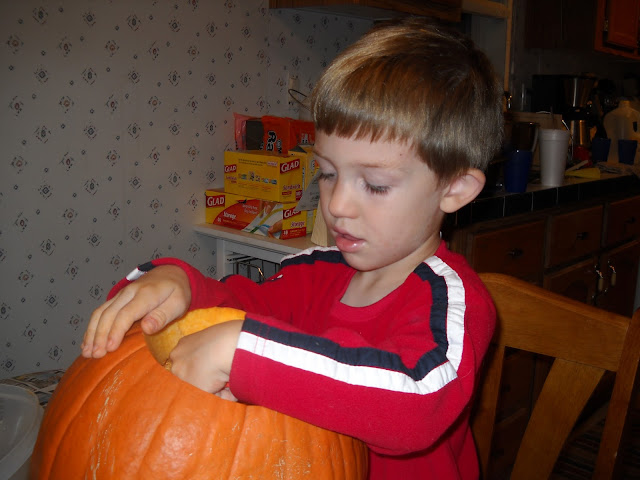 I helped Thomas by carving a "mad face" on his once he was done. You can see it here in the middle. My pumpkin is on the left. It is a ghost coming out of a fire. Aaron's was really complicated. It said the word "BEWARE" with claws along the top. 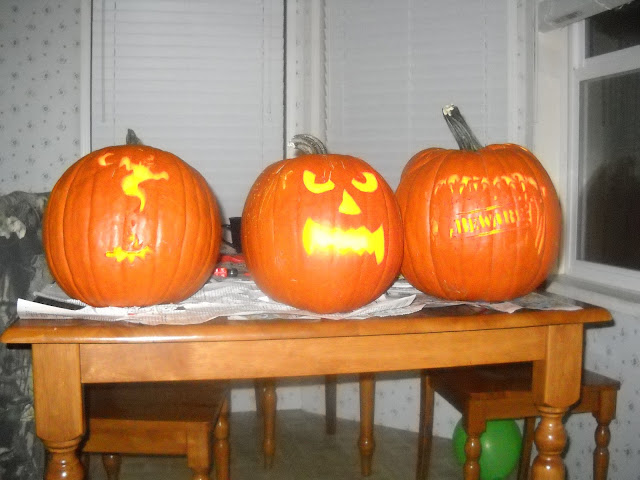 And finally the trick or treating! Thomas was so excited to go. We had been talking about it for weeks. We practiced a lot at home saying "Trick or Treat." He was very well prepared when the day finally came. Here he is giving me his best pirate "arrgghh" of the evening! 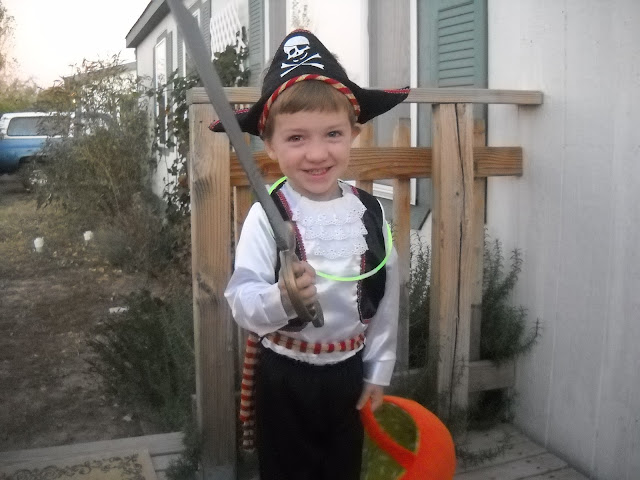 Mommy and Daddy with our little pirate. 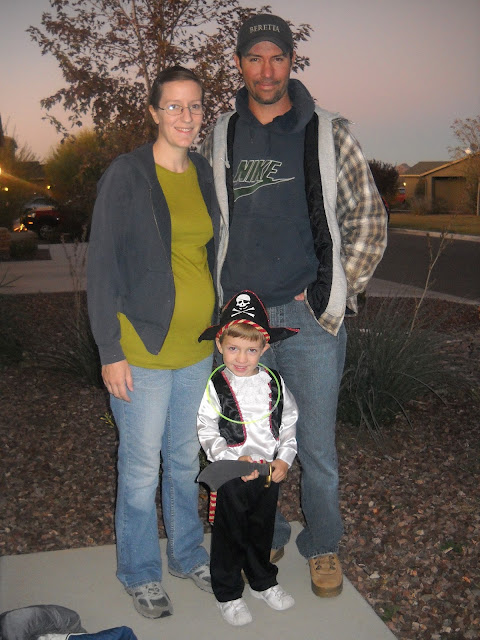 We went trick or treating with one of my friends and her son. They were too cute going up to all the houses together. All of the trick or treating went great, except for one house. It was decorated really spooky, so we maybe should have known better. We went up to the door which was not well lit. The kids knocked on the door and this guy jumped out from behind where we couldn't see him. My friend and I both screamed and instantly both the boys went running and screaming and crying. I think the guy who jumped out should have known better since they were small kids, but they did both survive. 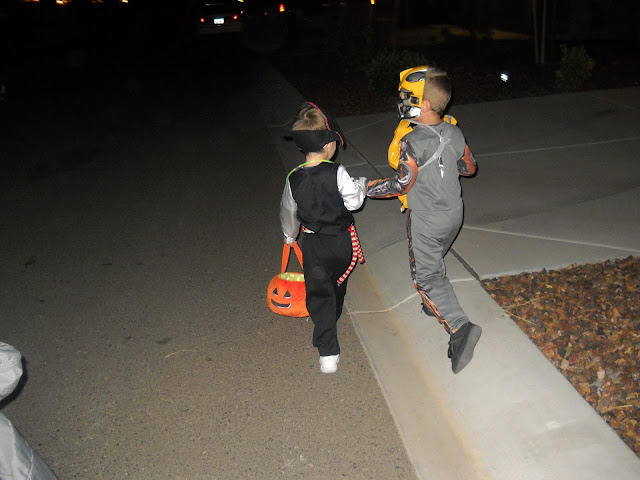 Here is Thomas with all his loot. I think he did pretty well! 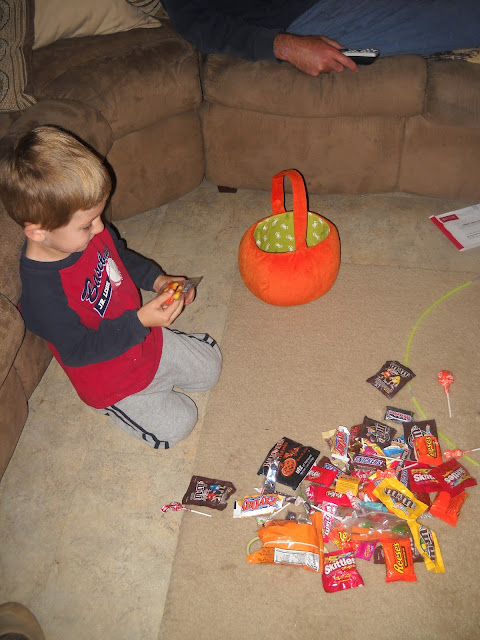