Okay, so this is just a funny story about Thomas. Lately he has been really into measuring things. With a tape measure, the bathroom scale, rulers, etc. But the funny thing is, for some reason any time he measures anything, whether it be a weight or a unit of length, he says, "Wow, a forty pound-er!"

It is too funny! This may only be funny to my husband and me, but every time he does it, it makes me laugh so hard. I am not even sure where he picked it up. He certainly is not a "forty pound-er." In fact, he is only a "twenty-five pound-er."

Mommy is on the scale. Thomas' response: "Wow, a forty pound-er!"

Thomas has the tape measure to measure Mommy's hands and feet. Thomas' response: "A forty pound-er!"

Thomas picks up the big shovel in the back yard, which is really heavy for him. His response: "Oh, this is soo heavy. It is a forty pound-er!"
Posted by Laura's Crafty Life at 6:31 PM No comments:

Email ThisBlogThis!Share to TwitterShare to FacebookShare to Pinterest
Labels: Thomas 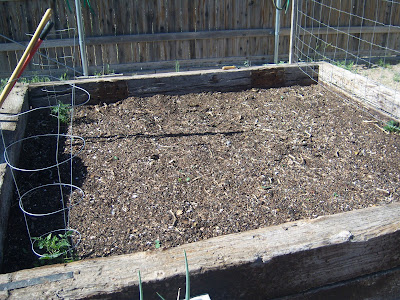 So this is mostly just me bragging about my stupendous gardening skills. Seriously, I am really proud of myself. You may be thinking, "Wow, this girl is really full of herself." But let me give you a little history of why I am so proud of myself now.

Before I met my husband, I never had a vegetable garden before. Or really any kind of garden for that matter. I was a plant killer. You know those supposedly 'easy to grow' plants? Well, apparently, for people like me they should be called 'easy to kill'. There must be something really special about my husband. Before him, no plant around me was safe.

When we moved in together, I took over the care of his plants. My husband is not only special, but brave, too. There was one particular plant, that although did not look terrible, certainly could have looked better. I was very careful with this plant. I found a new home for it with just the right amount of light. I watered it, making sure not to over- or under-water this plant. It began to grow, and grow, and grow. It was huge and a beautiful shade of green. (It used to be this sort of sickly looking light greenish-yellow color). 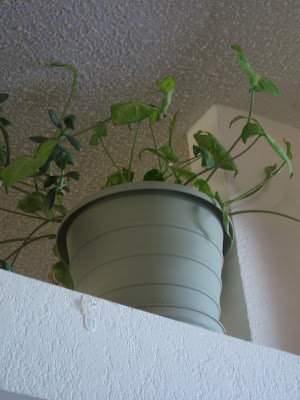 Then, we moved into our new house. At this point we had many flourishing indoor plants. I thought I would fertilize all the plants. It was easier to do this outside since we had so many plants. It seemed my curse of plant killing was finally over. I was so wrong. The beloved plant that was so lush and green was out in the sun too long. All of the leaves turned yellow and fell off. I was crushed. There were only two tiny little sprouts left on the plant after its traumatic ordeal outside. I nursed this poor plant back to health. It is finally (almost two years later) back to its original glory. All the plants seem to be doing fairly well in our house. Thank goodness for them, right?

So back to our garden. The first summer after we moved into our house we built an above ground garden. I was not very confident that it would go well since this was right around the time the other plant lost all its leaves. It was a lot of work to build, mostly on the part of my husband, but so worthwhile. Each year we get better at our gardening skills. We have had quite a harvest each year. And I am so looking forward to it this year as well. We planted our garden only a few days ago and already we have sprouts. 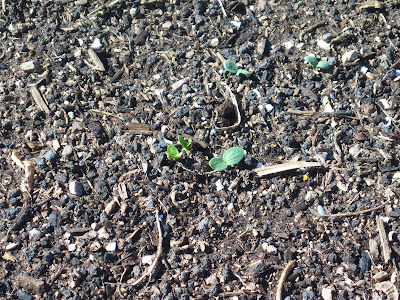 Like I said before, I am really proud of myself.
Posted by Laura's Crafty Life at 3:12 PM No comments:

Email ThisBlogThis!Share to TwitterShare to FacebookShare to Pinterest
Labels: Life

The other day, Thomas and I were outside in the front yard doing some landscaping. I was finally going to fix the bricks that were all messed up. I was not looking forward to doing this project. I figured the way to get motivated would be to at least pull up all the bricks that needed to be fixed. Even if I didn't get to lay them all back down right away, they would be sitting in the front yard staring at me every time I went out there. And that would drive me crazy enough to finally get it done.

Let me explain something about these bricks. We have a circular driveway. Our front yard is not even remotely landscaped yet. Last spring, I painstakingly laid each brick around the circular drive. This took me several days. I am a perfectionist and I just kept going out there to make sure that each brick was "just right."

Fast forward to last fall. The city was finally installing the sewer lines to our house. We had been on septic (which, by the way, we were perfectly content with). However, it was mandatory that the city come crush our septic system and hook us up to the city sewer line. So in the process of installing this sewer line, they pulled up half of my bricks in the front yard. They were supposed to put everything back the way they found it. Well, they did lay the bricks back down, but they looked awful. I was really upset, but since I am not one for confrontation, I just complained incessantly to my husband about how unhappy I was. Well, Aaron is good about confronting people, and he marched right outside and told them to redo the bricks. I have to admit, they looked better, but were not exactly as I would have liked them. I had no interest in relaying those bricks though, so I let it go.

Enter the present time. The bricks not only looked bad, they were now falling over. The nice men that installed our sewer somehow did not get the bricks in the ground correctly and with the rain, etc. they were tipping over. They looked awful, so it was time to take action. I was dreading this task.

Thomas and I were out front getting ready to pull up the bricks. I was having a hard time getting them up. So, Thomas says to me, "Pull really hard Mommy, you can do it." It was really funny because he was saying all this while trying to pull a brick out himself and he was really straining when he was telling me. I kept digging and pulling up each brick, getting more and more irritated that I should even have to do this project at all.

Thomas just looked at me and says, "Mommy, you are doing a GREAT job."

This may not sound like much, but first of all, he has never said this to me before. He hears it from me all the time, but I have never heard it from him. It was the best encouragement I could have gotten to finish my project.

The bricks, however, I have to say are not perfect, but they will have to do.
Posted by Laura's Crafty Life at 7:37 PM No comments: