Baby Pizza is a Girl!

Last night Aaron and I went to our rescheduled doctor's appointment. We had our ultrasound and found out Baby Pizza is a girl! We are completely thrilled. Each of us was hoping for a girl. Since my pregnancies have both been kind of rough, we have pretty much decided that we were only going to have two kids. And we are really excited to have one of each. 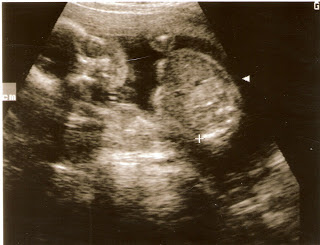 Now the next step is to come up with a name for this little one. I would hate for her to actually have to be named "Pizza" because we can't come up with anything else.
Posted by Laura's Crafty Life at 3:37 PM No comments:

Email ThisBlogThis!Share to TwitterShare to FacebookShare to Pinterest
Labels: Olivia

Frustration at the Doctor's Office

On Monday I was supposed to have my five month checkup at the OB's office. I am now 20 weeks pregnant and my husband and I were supposed to find out the sex of the baby. We have been telling people since my fourth month checkup that we were going mid-September to find out. Everyone has been eagerly anticipating finding out if Baby Pizza is a boy or a girl.

So, my husband asks weeks ago to get off work early so he can go with me to my appointment. It is really sweet. He really wanted to be there for this appointment to see this really special ultrasound. We drive all the way to my doctor's office which happens to be a little over an hour away.
We got into the office and the receptionist looks sort of confused that we are standing there. She says, "The doctor is not in the office today, he is out of town. There isn't even a nurse here today." So then the yelling started. My husband was furious. Somehow, my appointment did not get entered into the system. They didn't have me down for anything. So, of course, they could not call me to let me know the doctor had to go out of town unexpectedly.
Aaron and I were arguing about when to come back, which was really more of, "Well if we come back, is the doctor really going to be there?" kind of a thing. The receptionist suggested we just call back when we can figure out a time to come back.
And as annoying as the situation was, I think the thing that irritated me the most was that the receptionist didn't even apologize for the office making a mistake. Where are basic customer service skills? Granted, Aaron was yelling at her, but she had to understand we drove from out of town, my husband took off work and lost some of his PTO, and on top of it all it was the visit we were supposed to find out the sex of our baby. Instead, she just kept saying that it was an honest mistake and there wasn't anything they could do. I get that. She cannot make the doctor magically reappear. But where was the common courtesy to say, "I am so sorry for the inconvenience." Is that too much to ask?
Posted by Laura's Crafty Life at 2:46 PM No comments:

Email ThisBlogThis!Share to TwitterShare to FacebookShare to Pinterest
Labels: Olivia

Attack of the Fleas

Aaron called me at work a few nights ago to inform me our dog, Sadie, is infested with fleas. So, after work, I went to Walmart to figure out what I could get to get rid of the little buggers. I sat in the aisle for about a half an hour reading all of the labels and packages. We have Sadie, our dog, but we also have two cats. And of course you cannot use the same stuff on both types of pets. Especially since our dog weighs about 5 times that of either one of the cats. I am not a real big fan of unnatural products and pesticides, but I don't think I have much choice on this one. I will not have my house infested with fleas.

So Thursday morning, bright and early, I started cleaning. I did laundry since about 7:00 in the morning. So far, all the dog's bedding has made it through. I then had to give the dog a flea bath outside. She was stuck in her crate until she dried out or she
would have just rolled around in the dirt where she probably got the fleas in the first place. In fact, I know she would, because about mid-shampoo she got away from me and did just that.

I then had to go inside and give our two cats flea shampoo baths. Amazingly enough our cats do really well with baths. Although, they were a little scared that I had on rubber gloves. There were toxic warnings about the shampoo being absorbed through your skin and I am pregnant, so I wasn't taking any chances. I am sure the cats also really enjoyed being yelled at by Thomas who thought he was cheering them on while they were in the tub.

Here are some pictures of our poor soggy cats. 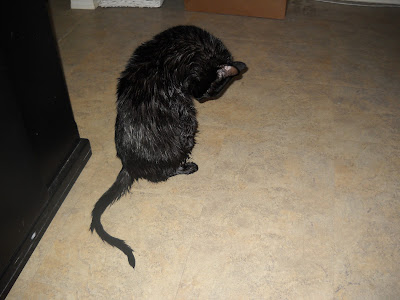 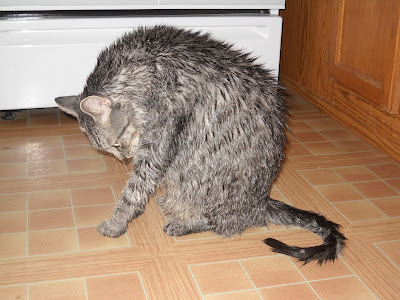 I then had to vacuum the carpets in the house and the couch, wash all of our bedding, and sweep the hard floors through the rest of the house. I sure hope that does it. I don't want to have to clean for a few weeks again, but according to everything I have read I need to keep up the vacuuming a few times a week until the fleas are gone.

Yuck!
Posted by Laura's Crafty Life at 4:45 PM No comments: